Hello everyone! I am home from Los Angeles, and, as many of you know, I won the New Talent Category at the What’s Next Awards. I have so much to say about this weekend, I wanted to divide it up into a few different posts. Of hundreds of entries, four New Talent and four Professional finalists from all over the United States and Canada were flown to Los Angeles for a hair-packed weekend. My husband, Richard, was able to make it out and keep me company.

The first night we had a cocktail reception on the hotel’s rooftop garden. Hair dressers, especially successful hair dressers, are so much fun. Such an eclectic, creative and charismatic bunch, and so incredibly approachable. Some of the Sebastian Global Artists were there, as well as a lot of the Sebastian educators, some of the folks from the business side of the brand and, of course, the other finalists. I learned a lot the first night about the brand and the beauty industry, and just generally had a fabulous time. And it certainly didn’t hurt that my stylist friend, Elysia, lent me a killer dress, completely perfect for a rooftop in LA. 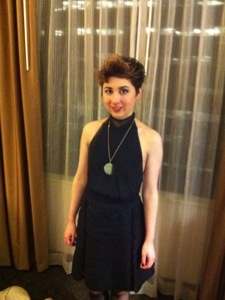 I also met the other finalists, and the more I look back on it, I couldn’t have spent the weekend with a better bunch of people. There was a lot of camaraderie from the very beginning. We were competitive, but we were friends. People lent tools and supplies freely, gave advice and honest opinions gently, and we talked (and laughed) openly. I hadn’t ever experienced something quite like the What’s Next Awards before, but the comparable experiences I’ve had were extremely intense weekends where at the end of everything, you have these intense moments with other people and then you know at the end that you will probably never see them again. The absence of that feeling was (is) one of the best parts of the trip. The idea that whatever “What’s Next” in my life, it will probably lead me back to some of the funniest, most original and most genuine people I’ve ever met.

Day 2 was a full day of practicing on our model and then meeting with wardrobe stylists and makeup artists to complete our look. It was very cool to see everything come together. Practicing was stressful because I am much more stubborn than I realized, determined to do things the hardest way possible and not use hair extensions at all. I was battling with a snake braid most of the day, a very tiny snake braid, which seems foolish for a runway show, but I am extremely detail oriented and also knew that the judges would be able to see all the detail up close before the show. For those that don’t know about snake braids, they are three strand braids where one strand does not move, so you run out of hair on the outer strands very quickly. Once braided the hair on two of the strands has compressed to a third or a quarter of the length. So when going around the whole head with a snake braid you need to add in more hair after every three inches or so. This problem was compounded by the fact that, like most women, her hair was shorter in the front than in the back. In the end I found that I needed to weave long strands underneath her hair to meet up with the snake braid where it ran out and then begin again a few times. At her forehead I used an extension tool to pull the braids into each other, which was quite a task. In the end I had a seemingly seamless snake braid.

More on the style and the rest of the event on Friday!